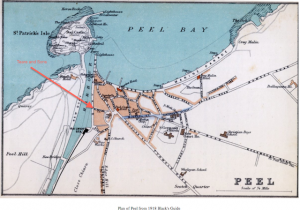 Peel is built on the tidal estuary of the River Neb halfway along the west coast of the Isle of Man. The name derives from the keep or peel tower of the castle built on St Patrick’s Isle. The earliest known fortifications were associated with the Viking chieftain, Magnus Barefoot in 1098 and the earliest habitation in the town is from the 13th century. Peel castle was the seat of government (with Castle Rushen) until the mid 17th century.

For many years the mainstay of the Peel economy was fishing, boat building and trading which employed most of the population. This reached a peak in the final years of the 19th century with the development of the herring fishery. Salted herring were exported to northern Europe and there was much demand for the famous Manx kipper.

The first railway between Douglas and Peel was opened in 1873 and tourism became more important. In WW1 a prison camp was set up at Knockaloe Farm and in WW2 requisitioned guesthouses became Peveril Internment Camp. In the 1930′s the name ‘The Sunset City’ was coined and although tourism declined in the 1960′s, with closure of many guesthouses, you can still enjoy sunsets with local caught scallops and queenies.