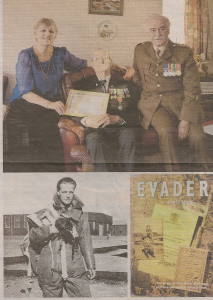 Denys Teare, who lives in Ramsey, has been awarded the Legion of Honour by the French Government for the part he played in fighting alongside the French Resistance in WW2.

In September 1943 Denys baled out of a burning Lancaster bomber returning from a bombing raid over Germany before it crashed into hillside some 110km south east of Reims. He was sheltered by French families and the French Resistance escape networks could not get him back to England before the allied landings in Normandy on 6 June 1944.

Consequently he spent a whole year living in occupied rural France changing from being an ‘aviator anglais’ and a liability to his hosts to become a fluent French speaker, ally of the Resistance and saboteur. The American 3rd Army eventually reached the town where he was hiding and he was liberated exactly a year to the day that he had parachuted into France.  His story of those 12 months; of life in occupied France, the friendships made, tragedies witnessed, the tensions of ‘living with the enemy’ and even at times almost a normal life bringing in the harvest with French farmers as the Allied armies got ever closer is told in his book ‘Evader’

Thomas Denys Gordon Teare was born in Liverpool, his father J.G. Teare was a village school headmaster and had received official notification that his son was presumed dead as there had been no news of his whereabouts since the crash. In fact, and against all the odds, the whole crew of the Lancaster ‘S for Sugar’ survived the crash and the war but they didn’t meet up again until it was over. Denys later trained as a fireman and worked in Widnes before eventually settling in the Isle of Man.

Evader was first published in 1954. Now published by Crecy Publishing it is available from on line retailers. It’s a great read.

Congratulations to Denys on receiving this, the highest decoration from the French Government.

This entry was posted in Uncategorized. Bookmark the permalink.