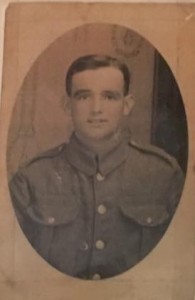 Charles Henry Teare was born 23 January 1895 in Douglas, IoM, son of John Teare, a general labourer and Lydia Margaret Clague. In 1901 the family was living at 12 Barrack Street and there were 5 siblings George S, John F, Gladys E, Thomas A and Margaret L. In 1911 Charles was working as a message boy.

Charles was first a private in the King’s Liverpool Regiment (No. 26942) but in November 1918 he was private 48822 in the Royal Inniskilling Fusiliers 6th Battn.

Major General Sir Archibald Montgomery writing the story of the fourth army in the battles of the 100 days August to November 1918 recalled ‘Throughout the remainder of November 7th considerable fighting took place. The numerous sunken roads, copses, and hedgerows concealed the enemy’s machine-guns which covered the withdrawal of his rearguards. Slowly but surely, however, each centre of resistance was located and dealt with in turn. Particularly severe was the fighting in the 50th Division area in the village of Dourlers, which was captured by the 6th Royal Inniskilling Fusiliers supported by the 1st King’s Own Yorkshire Light Infantry.’

Charles Teare died of wounds on the 7 November 1918 and is buried in Dourlers Communal Cemetery Department du Nord, Nord Pas de Calais, France and so it seems very probable that he was in the severe fighting when the 6th (Service) Battalion Royal Inniskilling Fusiliers took the village of Dourlers on that day.  He is remembered on the Onchan War Memorial, Harris Promenade Memorial, Douglas and in the Ireland Memorial Records 1914-18.

Back to WW1 Teare Memorial Page

This entry was posted in Isle of Man, Teare, UK, WW1. Bookmark the permalink.