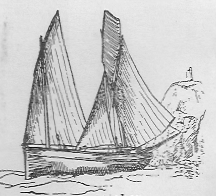 Fishing has always been an important part of Manx life and the Manx diet but until the mid 19th century the Manx fleet fished only close to home and had a very limited season. Catching herring was illegal before 5 July to ensure immature fish were not caught and so fishermen were ‘part time’ usually also working as farmers for the rest of the year. Up until about 1800 fishing was carried out from open clinker built boats with sails and oars called ‘scouters’. These evolved so between 1800 and 1830 most of the fleet was composed of half decked cutter rigged ‘smacks’ which still had the disadvantages that the mast could not be lowered and there was not much room for handling nets. There were two sizes of smacks, the smaller ones fished and the larger (between 40-60 tons) cruised around the fleet and to buy up the catch and rush it to market. This was the same sort of system that had been perfected by the Dutch fishing fleets in the 16th century when they came to dominate the North Sea herring fishery. The Manx smacks traded widely taking red herring (smoked) and salt herring not only to close British ports like Liverpool but also to the Mediterranean bringing back oranges and onions.

In the 1830’s the smack underwent a further evolution: the length of the boom was cut down and a mizzen mast with a small lug sail added. This caused these boats to be known as dandy smacks or ‘luggers’. They were 38-47 feet length and 12-14 feet beam generally carrying a crew of 7.  The advantages of this lug sail and a tabernacle mast that could be lowered meant that the boats did not move about as much when lying to the net and between 1840-1860 they made up most of the Manx fleet.

In the early 1860’s the mackerel fishing in the fishing grounds about 40 miles off the Irish coast were opened up and Manx fishermen were quick to recognize the superior speed and seaworthiness of Cornish luggers which outpaced their dandy rigged boats. The story is that one of the first of these boats to be delivered to Peel was named the Nicholas and so the newcomer was nicknamed a ‘Nickey’ to distinguish it from the dandy rigged boats. This boat was a great success and Nickeys continued to be built in Manx yards for about 30 years. A typical Nickey was 20-28 ton, 45-55 feet length, 15 feet beam with a forward draught of 5 feet and 7 feet aft. This meant that when aground the deck had an angle running stern to bow and legs were needed to keep her upright. The main mast was about the same length as the boat and raked slightly aft when the boat was afloat whereas the mizzen mast was approximately upright. The big advantage of this rig design was that a nickey could sail much closer to the wind than a traditional lugger but changing sails for different wind strength and dipping the forlug when going about (changing tack) required good seamanship and a well trained crew. As the fishing catch declined towards the end of the 19th century the fleet diminished but so did the numbers of experienced sailors and many boats were converted back to the dandy rig, which was easier to operate.

Towards the 1890’s the Nobby, copied from Scottish skiffs, was introduced. Instead of a dipping lugsail Nobbys had a tall standing lug on the main mast and there was a staysail and jib on a towspit which could be housed when in port. The mizzen also had a standing lug. A Nobby was smaller than a Nickey, those 30-40 feet long fished for the spring and autumn mackerel and the smaller 25-26 feet length class fished home waters. They had a smaller crew than a Nickey and were often skipper owned. They were the last boats to be built for fishing in Peel and continued to be built for the Irish Fisheries District Board until the last ship yard closed around 1930.

This entry was posted in Boats, Isle of Man, Peel, UK. Bookmark the permalink.