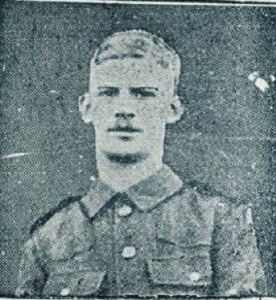 Thomas William Teare was born in Oldham Lancashire son of George Henry Teare and Sarah Nicholson and was baptized at St John the Baptist, Toxteth Park on 9 September 1883. His father, George, was ships carpenter and the family lived at Sefton Square, Liverpool.

In 1891 Thomas was living with his widowed mother and his siblings George, Albert, John and Mary in Ledwards Street and his mother was a shopkeeper. His mother remarried to Frederick Law, a baker, and in 1901 the extended family (Thomas and 3 siblings plus 4 step siblings) were living in Elswick, Northumberland.  By this time Thomas was working as a baker. But this didn’t last and Thomas joined the Northumberland Fusiliers, his service number suggests this was at some point in 1904. The normal length of service in those days was seven years so it was possibly a freshly discharged Thomas (a stripper and grinder by this point) who appears in the 1911 census back in Royton.

When war broke out, as a reservist, he was immediately called back to the colours. He would first have had to travel to the regimental depot in Newcastle and then all the way down to Portsmouth to the regiment’s 1st Battalion (the other regular battalion, the 2nd, was still in India). They set sail from Portsmouth on August 13th along with the 1st Lincolnshires on board the dangerously overcrowded SS Norman and arrived safely in Le Havre the following day. The strength of the battalion as it marched off the ship was 1016 officers and men. Almost all of whom would either be killed or wounded by the end of the year. They were to see action at The Battle of Mons and the rearguard action at Solesmes, The Battle of Le Cateau, The Battle of the Marne, The Battle of the Aisne, at La Bassee, Messines and the First Battle of Ypres.

It was during the Battle of Ypres that Thomas was killed. The battalion marched through Ypres on November 6th, Thomas Teare would have gone through the Menin Gate where his name is now engraved. The following day found the men dug in, waiting for an expected German attack. As expected, it came and the trenches either side of the position held by some of them were overrun. Others from the battalion launched a counter attack to try to retake the trenches they’d been driven from but the attack faltered. This left a group of Northumberland Fusiliers, led by a Captain Gordon isolated. A communications trench was quickly converted to a fire trench to face the new German positions. During the night Captain Gordon’s trenches were re-supplied with water and ammunition and he was ordered to hold their position at all costs.

On November 8th there was intermittent shell and rifle fire directed at the men until at 17:30 the Germans left their trenches and charged at Thomas Teare and his comrades. They were repulsed, suffering heavy losses. Some of the Germans died on the parapet of the 1st Northumberlands’ trench, a couple even getting into it. Thomas was killed in action on 08 November 1914 leaving £4 8 shillings and 6 pence pay which was split between his mother and 3 brothers, his step brother and step sister.  He is buried in Ypres, West Flanders and remembered on the Menin Gate Memorial, Ypres.

Back to WW1 Teare Memorial Page

This entry was posted in Teare, UK, WW1. Bookmark the permalink.