Centenary of Wanderer rescue after sinking of Lusitania 7 May 1915 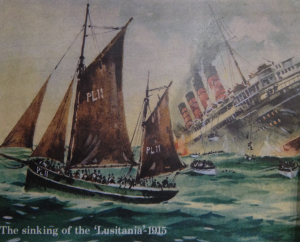 The Wanderer (PL11) a Peel built and operated fishing boat was the first on the scene of the disaster as she had been shooting her nets 10 miles south of Kinsale head when the Lusitania was torpedoed. She sailed to the scene and was able to pick up over 160 survivors. Luckily the sea was calm and they took 110 on board and towed the others in a raft and lifeboat until they could be transferred to other boats. The letters from the crew of the Wanderer provide a vivid first hand account of the final moments of the Lusitania and the efforts to rescue as many as they could in a small fishing boat which quickly became overloaded.

The Wanderer PL11 was built in Peel in 1821 and sailed with a crew of 7 with skipper William Ball (Jurby), his son Stanley, William Gell (Ramsey), Thomas Woods, Robert Watterson, John Macdonald and Harry Costain (all from Peel). One of her shareholders was Charles Morrison a Peel grocer and it was to him the letters about the Lusitania rescue were sent. His daughter Eleanor Morrison was married to William Edward Teare, sailmaker and partner in Teare and Sons ships chandlers. Wanderer was sold to Ireland and renamed Erins Hope. Later she was fitted with a motor and continued fishing until the 1930s.

There were 771 survivors in all and 128 American citizens amongst the dead. In firing on a non military ship without warning the Germans had breached international law (the Cruiser Rules). The Germans accused Lusitania of being a naval vessel because she was reportedly carrying munitions and said the British had been breaching the Cruiser Rules. The presence of  munitions in the cargo was never proved and  this sinking caused a storm of protest in the United States. The resulting propaganda was important in changing public opinion and the subsequent decision for America to enter the war.

See the recent BBC article and video at http://www.bbc.co.uk/news/world-europe-isle-of-man-28677593